Is Your Diet Healthy?

Is Your Diet Healthy? 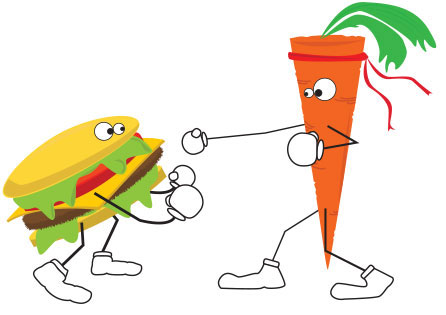 Many popular diets have massive marketing budgets, with millions of dollars spent promoting them.  The reason that many of these diets are successful is not because they are healthy, but because they can afford to make themselves highly visible.  In fact, some of the most popular diets out there contain some very unhealthy ingredients.

Just because a diet sells well and is covered with savvy marketing claims, it does not mean it is good for us.  Most aren't.  Separating the facts from highly convincing marketing fiction can be difficult, not to mention that many diets may give us short-term weight loss but set us up for long-term chronic disease.

Let's take a few minutes to learn what makes a diet healthy, and what makes it a bad choice.  Then take a look at your diet and see how it stacks up and where there's room for improvement.

It is always a warning sign when a food label contains a long list of ingredients that you do not recognize as whole foods, and many popular diets freely advocate highly processed and packaged frozen foods complete with assorted chemicals.  If your diet recommends foods in pre-packaged frozen meals, the only ingredients it should contain are whole foods (e.g. tomatoes, celery, carrots, potatoes, spinach, lentils, spices...).  The exception is extra ingredients that act as natural preservatives, including:

Are Most Of the Meals Frozen Or Canned?

Learn more about the vibrational energy of food:
The Body Healer Protocol...

Most of the cans that contain food also contain a toxic product called BPA.  Always look for the BPA-free logo on the label or the bottom of the can.  If you do not see it, pass on the food.  ...Read about BPA

Do the Meals Require Microwaving?

When you microwave food, not only do you reduce the nutritional content and damage the molecular structure of the food, but microwaved foods also have a direct and immediate impact on the blood and biological systems of the body.  Irradiated foods are also foods that have been damaged by a process called irradiation.

Does It Include Plenty Of Fresh Foods?

Does the diet recommend a variety of whole foods from the produce section of the store?  Does it include plenty of raw foods (think salad ingredients, fresh fruit, and raw sprouted grains and seeds)?  If not, then it is not in the best interest of your health.

Does It Contain Processed Corn or Soy?

Processed corn and soy are two of the absolute worst offenders in the processed food world today.

Processed soy has now made its way into almost every category of food in our supermarkets.  From meat substitutes and frozen meals, to cereals, crackers, cooking oils, soy milk, salad dressings, food emulsifiers (lecithin), condiments, soy protein bars, protein shakes, and supplements, to feed for farmed animals, and pet foods - heavily processed and refined soy is everywhere.  To add insult to injury, the majority of it is genetically modified.  Even though soy infant formulas are banned in some countries and carry serious warnings in others, it still flows freely in the US.

Healthy food does not contain processed soy because processed soy is NOT a health food.  It is a sludge that does not belong in a healthy body.  The only soy that should be listed is from whole soybeans (edamame) and it should be listed as "non-GMO."  Unfortunately, processed soy is hidden using a variety of terms on food labels.  If you are purchasing soy sauce, always look for Nama Shoyu (unpasteurized soy sauce) sold in many health food stores, and make sure it is not genetically modified.

Similar to soy, it is difficult to find a food item in the supermarkets, pet foods, and livestock feed that does not contain genetically modified and highly processed corn derivatives that in no way resemble the original healthful "whole food" state.  The ONLY corn ingredient that should be listed in your food is fresh sweet corn.

Does It Require Calculations

Does your diet force you to keep count of calories, weigh food, or calculate nutrient percentages?  Does this sound realistic to you?

Does It Educate You About Healthy vs. Unhealthy Food? 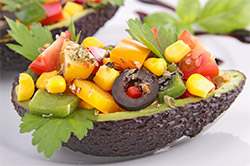 It should teach you the differences between natural and unnatural foods, and recommend fresh produce, as opposed to encouraging a reliance of frozen meals that require microwaving.

Does It Restrict Healthy Carbohydrates?

Any diet that does not promote a variety of fresh vegetables (which are naturally high in carbs) as a primary food source, with the addition of fruits and sprouted grains, will fall far short of being a healthy diet.  Depriving yourself of these vital foods deprives you from ever achieving the highest level of health and vitality, and a higher vibrational state of being.

Depriving your body of carbohydrates deprives your body of its natural source of fuel.  The body is highly efficient at burning carbohydrates, and is energized and vitalized by eating the right types of carbs.  Contrary to what some diets preach, fat is NOT the primary fuel source for the body.  High fat meals result in sluggish digestion that drains our energy reserves, as opposed to meals high in water content that digest rapidly and efficiently.

Why you should avoid low carb diets...

Restricting carbs is the #1 cause of food cravings on diets because the body will ALWAYS crave its primary fuel source.

Does It Contain Factory Farmed Meat?

If meat is purchased in the US and it is not organic or pasture-raised, then it is factory-farmed.  Exceptions to this are animals such as game meat (e.g. bison, deer, elk, rabbit, pheasant, duck, and geese).  Factory-farmed meat is the meat sold in many popular diets on the market.  If your diet food advocates eating factory-farmed meat, please learn about the health consequences, about the irresponsible choice these diet companies have made to include factory-farmed meat, and why you should walk away from the diet and never look back:

Does It Contain Genetically Modified Ingredients?

Foods that contain genetically modified ingredients (GMOs) are very different from their conventional counterpart.  Their protein structure has been altered, and controlled studies in rodents have revealed that GMOs cause a variety of serious health consequences ranging from organ damage, infertility, shortened life span, allergies, and food intolerances.  These are studies you will read about in Europe and other countries, and that have been withheld from the general public in the US.  There have been zero long-term health studies on genetically modified ingredients, and none of them have been tested by the government.